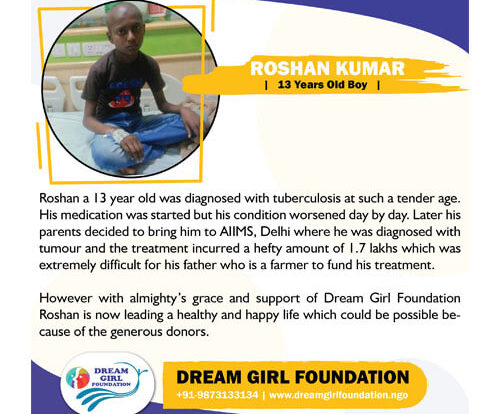 “Deeds of giving are the very foundations of the world.”

In this world of materialistic hegemony where each and every person is after fulfilling their material desires, it would be a challenge to find a person possessing a compassionate soul. However, there have always been people who are ready to help the ones in need and instill the joys of love and kindness. They create a ray of hope for the society and help it to channelise in the appropriate direction. Dream Girl Foundation has also played a vital role for the upliftment of the children of our society. Such is the story of a braveheart named Roshan Kumar. 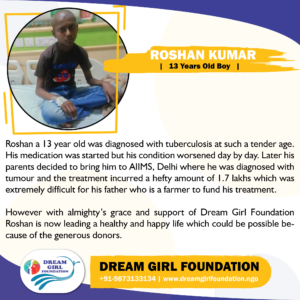 Roshan is a 13-year-old young boy who studies in 6th grade. His roots are from Madhubani in Bihar. Roshan’s father is a farmer by profession and earns a meagre amount of 6000 rupees per month. His father has two kids and it becomes extremely difficult for him to run the family on a such a meagre amount. Roshan’s family is poverty stricken but the conditions got worsed when Roshan found a big bump on his neck. The doctors in Bihar had diagnosed him with tuberculosis and it became extremely difficult for his family to fund for the medications. However, medicines for TB was given to Roshan but his condition started to deteriorate day by day.

The family had brought Roshan to All India Institute Of Medical Sciences, Delhi where Roshan was diagnosed with tumour. This news hit Roshan’s family like a thunderclap and they became extremely anxious. AIIMS doctors had asked the family to go for CT Scan and starting the treatment immediately. Since AIIMS is always bustling with patients it was discovered that there was no date for the CT Scan for next two months. Then they rushed him to Sir Ganga Ram Hospital where the doctors diagnosed Roshan and said that his entire treatment would incur a hefty amount of about 1.7 lakhs. Kumar’s family had already spent a hefty amount of 5 lakhs for his treatment which they could allocate by selling all their property and they were left with no money to continue his treatment.

Roshan needed immediate medications and his family was going through a lot of financial strain. However, with the support of organisations such as Dream Girl Foundation Roshan’s medication was funded. Many pious people came ahead to donate for his treatment and tried their level best to bring back the lost smile on his face and helped the brave soul stand on his feet. It is because of such noble humans, young souls like Roshan could triumph the battle. Roshan is now in good health and is ready to chase the world with his creative endeavours. Roshan is an epitome of courage and valour and has thus been successful in winning the battle. The greatest joy lies in the essence of sharing, kindness and compassion. Thus, in order to give meaning to others life, one must practice compassion. Little act of kindness could make the world more beautiful and a better place to live in.

Keep spreading smiles and embrace the lives of the ones in need.