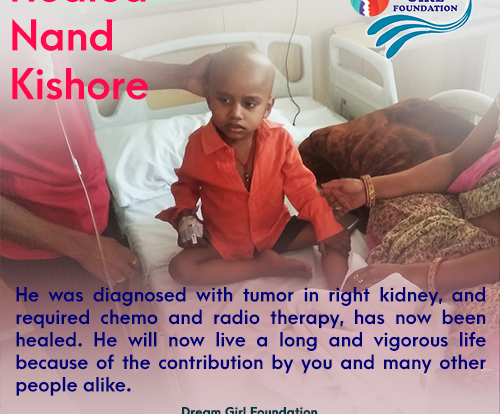 When all unite for a cause then undoubtedly achievement comes in. We are delighted to notify you that Nand Kishore Gupta, who was diagnosed with tumor in right kidney, and required chemo and radio therapy, has now been saved. He will now live a long and vigorous life because of the contribution by you and many other people alike.

Nand Kishore got victimized of the same problem twice- firstly, when he suffered from high fever and constipation, and was taken to local doctor where he underwent an ultrasound test; it was not cured there. He was brought to Sir Gangaram hospital, Delhi where all the tests were done, and his right kidney was operated and removed as the tumor was growing rapidly. His father (Prem Shankar Prasad) who was a cab driver arranged Rs. 3 Lakhs himself thinking of his son’s quick recovery.

Secondly, In February 2019, Nand Kishore faced this difficulty again severely. After consultation with Dr. Shyam Gupta, it came out that tumor had spread to the left Kidney, and he suggested as Nand Kishore was surviving on a single kidney the only option left was chemo and radio therapy which had to be performed at Sri Gangaram hospital.

Nand Kishore’s father couldn’t afford the treatment of his son which he did previously for Rs. 3 Lakhs, and our organization Dream Girl Foundation was approached for the assistance. We started the campaign, and all the funds were successfully submitted at Sir Gangaram hospital, Delhi. With the help of this fund the main step of Radiotherapy is completed at BLK Hospital and now only very few chemotherapies are needed and in next 4 months treatment of Nand Kishore will be successfully completed. We are much thankful to all the donors who supported and contributed for this cause which came out to be victorious. 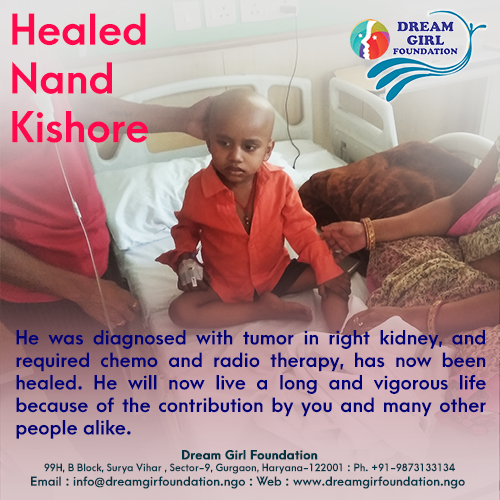